This post may contain affiliate links. That means if you click and buy, I may receive a small commission. Please read my full disclosure policy for details.

These pirate theme party ideas are intended for grown-ups who want to throw a really fun party they’ll remember forever. Wonder if this theme will work for you? Well, a pirate theme party is perfect for times when the birthday guy is irrepressible, a bit mischievous, and hasn’t quite “grown up.” Is your guest of honor a rascal like this? If so, read on! 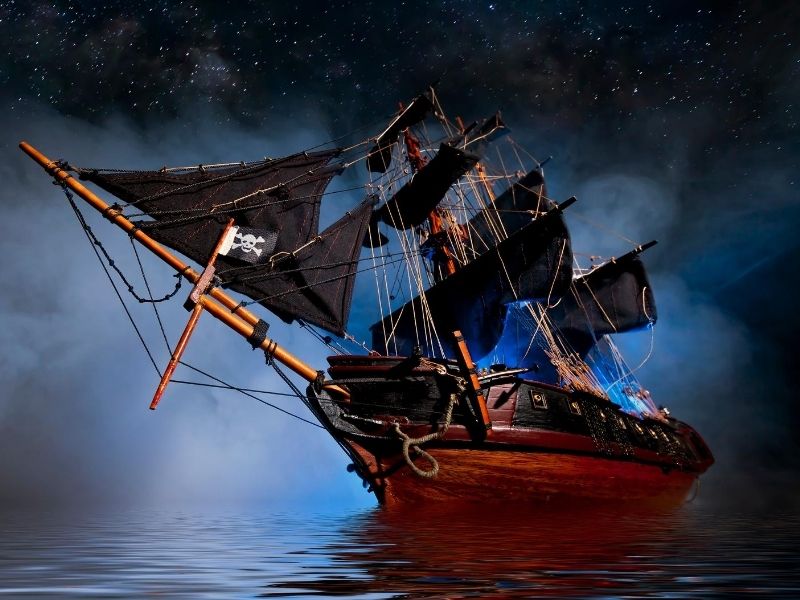 Wait a second.  Aren’t pirate-themed parties for little boys?  Well, yes they are…but! You can make this work for older “kids” and have quite a lot of fun with it.  It’s a great party to decorate and so much fun for guests and you!  Real pirates came in all ages, shapes, and sizes, so it can be that way now.

By the way, I’ve geared this page towards a male birthday because the vast majority of pirates were men.  In fact, women weren’t even allowed aboard a ship. It was a crime!  However, if you wish to use this theme for a female birthday, more power to ya!  We don’t discriminate around here.  It’s completely up to you!

The Premise Behind My Pirate Theme Party Ideas 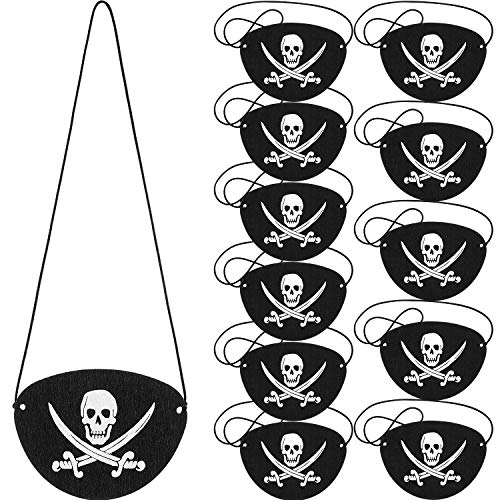 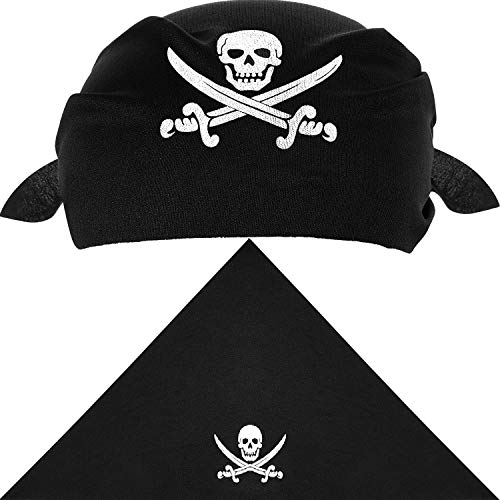 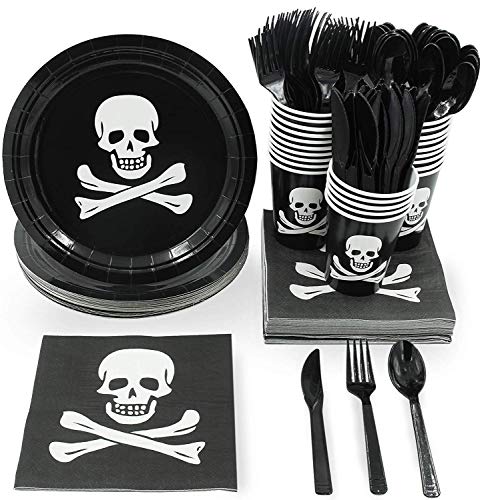 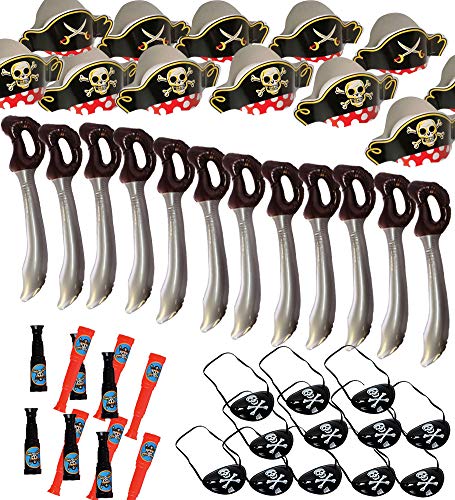 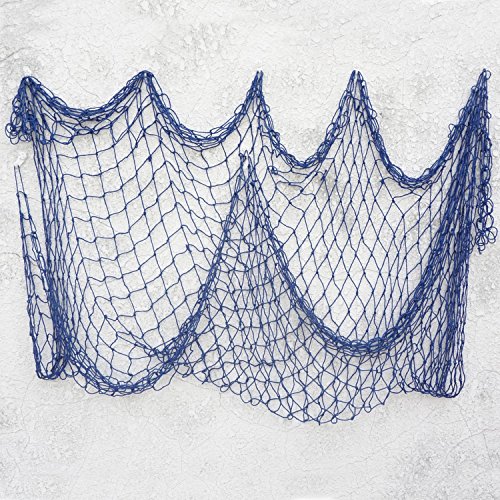 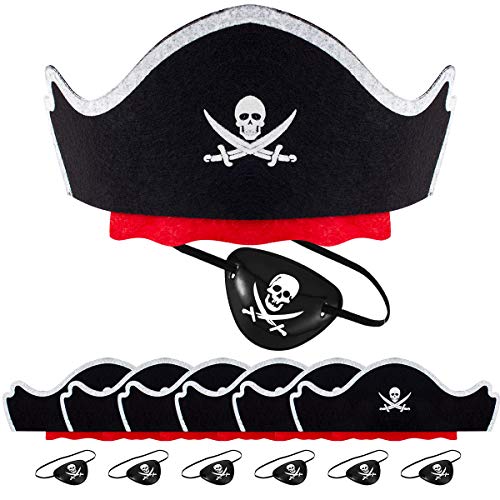 Pirates were looters and pillagers. They made their living harvesting booty from the high seas by overtaking vessels that sailed through perilous waters.  Pirates used as much force as necessary to conquer a ship so they could plunder it. They frequently took prisoners, and capitalized on their human bounty in various ways, including selling those prisoners as slaves.

If they couldn’t profit from them, they abandoned their hostages on deserted islands or disposed of them in other, more gruesome ways.

Why am I tell you all this, you ask?   So you can appreciate the pirate theme scenarios I’ve put together for you, which are coming up next.   Scroll down a wee bit and you’ll see. 🙂

Ah yes, there they are!

Kick It Up With These Pirate Theme Scenarios

Your birthday person could be the captain of a happy crew.  His job (and his life) is secure because all the pirates like him and aren’t devising an evil pirate-plot to mutiny or worse.  In this scenario, you and your party guests will treat the Cap’n kindly and show him the time of his life. You and your mates will wait on him hand and foot, give him lots of hugs … and a treasure chest full of birthday gifts!

In this scenario, you and your guests are not at all pleased with your captain, the birthday boy, which means you can do all kinds of low-down stuff to him.  (Heh, heh. Wink-wink!)

I’m thinking you could prank him lavishly.  For example, one very piratey thing you could do is to make him walk the plank.  In other words, you would blindfold him and make him go from person to person seeking out his birthday gifts.

However, not everyone will have a gift to give…well, not pleasant a one, anyway.  Have them hand him a fistful of Silly Slime or Poo-Dough instead, put vinegar in his drink, hide the stereo or TV remote… anything harmless, but wickedly fun!

If you manage to make your party activities coordinate with this idea, you could give your friend or husband or father a hard time and get away with it c-o-m-p-l-e-t-e-l-y! What a gas, and besides, think of the pictures you could get!

Anyway, this scenario would be an interactive “roast” (more roasting ideas here).  You should definitely tease him with toasts and jokes, put whoopie cushions on his seat, put plastic bugs in his food, give him gag gifts, etc.  What a laugh it would be!

Remember though, eventually, you’ll want to wind down and tell him the truth – how much you all really love him!

Scenario 3 – Prisoner from a Hijacked Ship

In this scenario, your guest of honor is not a pirate, you are.  Instead, the birthday person is a prisoner from a commandeered vessel whose fate has not yet been decided by the pirate crew.

It would kind of work like scenario #2, but in this situation, they would be a captive servant.  Of course, the birthday guy would have to cooperate and do things voluntarily, like fetch drinks (bartending) or cook (grillmaster), but I’m sure you can find ways to make him do your bidding. If not, there’s always the whoopie cushion trick as in #2 above!

If you choose to wear costumes, remember that he’s not the pirate in this scenario. So his costume would be the customary attire of the day.

Have fun with these role-playing scenarios and think of ways to add a spark of fun to your pirate theme party idea!

Think about it.  This pirate theme party idea would be a blast to decorate!  You could do a little bit, or you could go all-out.  Get into the pirate spirit and try some of these plans: 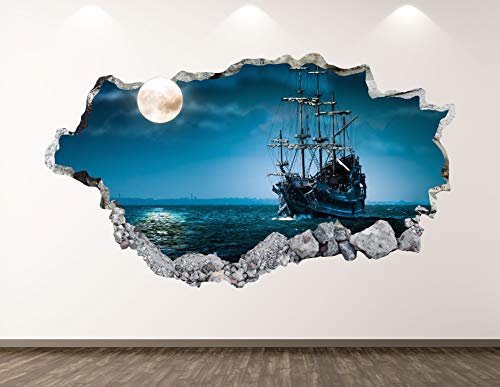 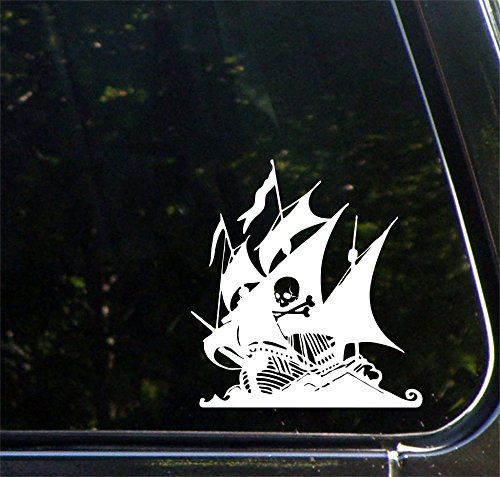 Pirate Ship with Skull and Crossbones

How impressive would it be to walk into the party and find a colossal pirate ship inside?!  This pirate theme party idea can be done without a large prop, which would save space, time, and expense.  How? By hanging a pirate ship mural on your wall.  You can find decals and wallpaper that can be rolled on.

A pirate theme party invitation should convey the motif, foster excitement, and generate anticipation. This idea does just that!  Check it out. Treasure map invitations in a bottle.  Can you believe that?  I found these at InvitationinaBottle.com.

Click the image of the links above if you want more information. They will take you to their page. I know you can mail these little bottles, or have them do it for you. Just be sure to read their policies so you’re aware of any limitations. 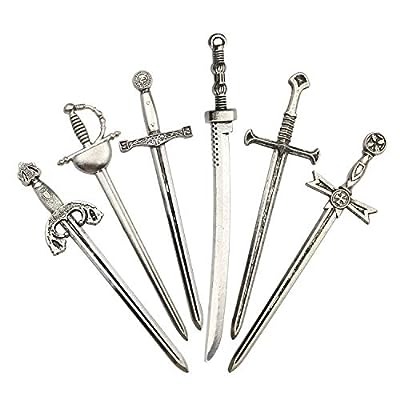 You can get these novelty toothpicks at most grocery stores.  Use them for hors d’oeuvres and drink garnishes. It’s a little touch your guests will appreciate.

Speaking of hors d’oeurves, grab a small anchor-shaped cut-out and use it for your cheese slices. 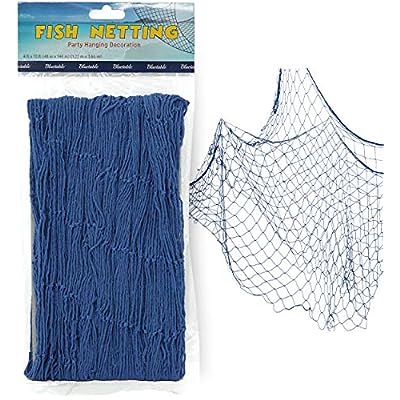 Drape netting along the tops of walls and use the folds to place photos of the birthday person and family. Starfish, seashells, and plastic fish can be interspersed for interest and balance. These can be purchased at any party supply store.

Check Craigslist or even your own garage for aging oars or canoe paddles that can be laid out as part of the scenery.  Clean them well, then place them on the coffee table, if desired, or hang them among the nets. 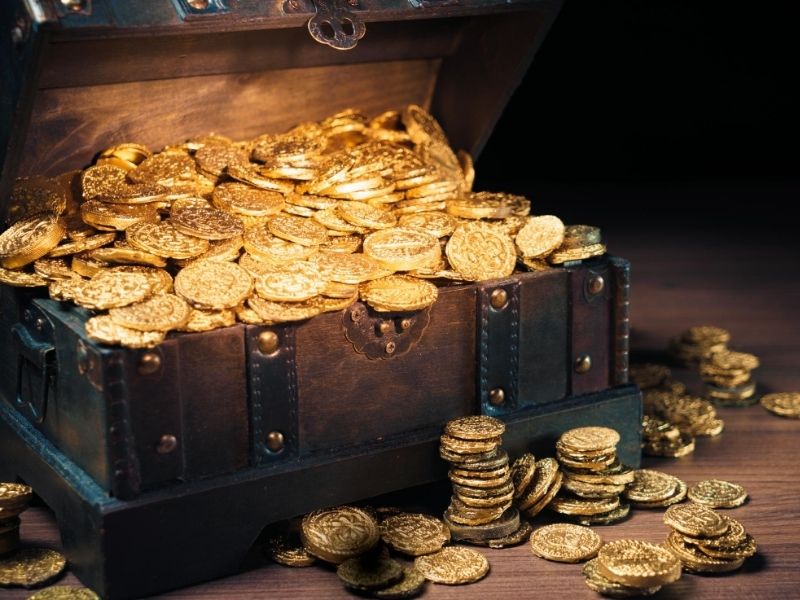 Pull out your old chest or foot locker and drape the interior with fishnet.  Then use it to hold the gifts. 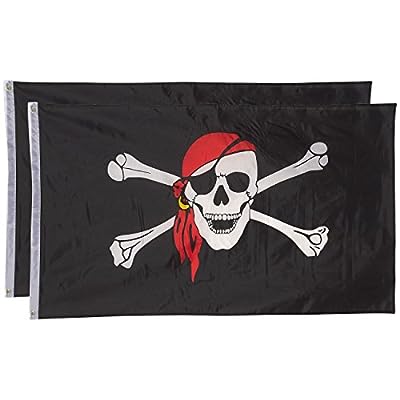 The black flag with a white skull and crossbones is known as a Jolly Roger.  It’s the classic pirate symbol. Use this as your Happy Birthday banner. You can also use a black flag as it represents anarchy which is completely pirate-friendly. Tie black flags from the ceiling and/or mount a Jolly Roger on the wall. 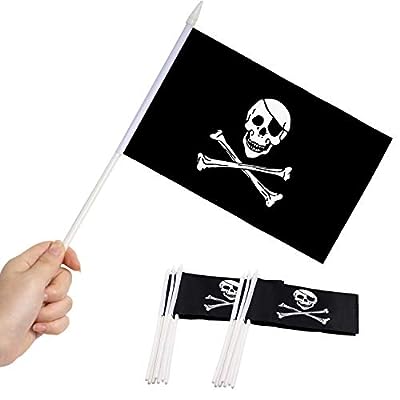 Need to post signage to help guests find your pirate theme party?  Use miniature Jolly Roger flags imprinted with directional arrows on street corners to guide your guests through your neighborhood. If you’re consistent with your artwork, words may not even be necessary. Just seeing those ominous pirate flags posted about town with clear directional arrows will give guests the message.

Encourage Your Guests to Participate

If you’re planning on any type of role-playing like the examples above, encourage your guests to participate by mentioning it in your invitation. “Don your favorite pirate suit and join us” or “Costumes encouraged” are two possible ways you can work this. Costumes are also a great idea if you plan to hire staff for your event.

Bear in mind, pirate costumes are fairly easy to find, and being in character really puts a finishing touch on your party. However, some costumes are cheap-looking. You can choose from:

Of course, you can put together a more risque outfit, like something off the shoulder or something with a corset if you’d like, or you could choose loose-fitting harem pants for comfort and authentic looks.

Other sources for pirate costumes can be found at all Halloween shops or Party City if you have one nearby. Amazon or eBay are also sources of inexpensive pirate wear.

Depending upon your gender, you will need different things to complete your pirate ensemble.  These you can put together yourself, grab at the thrift store, or pick up at a local party supply shop.

I hope you enjoyed my pirate theme party ideas and enjoy using them for your 50th birthday party even more. 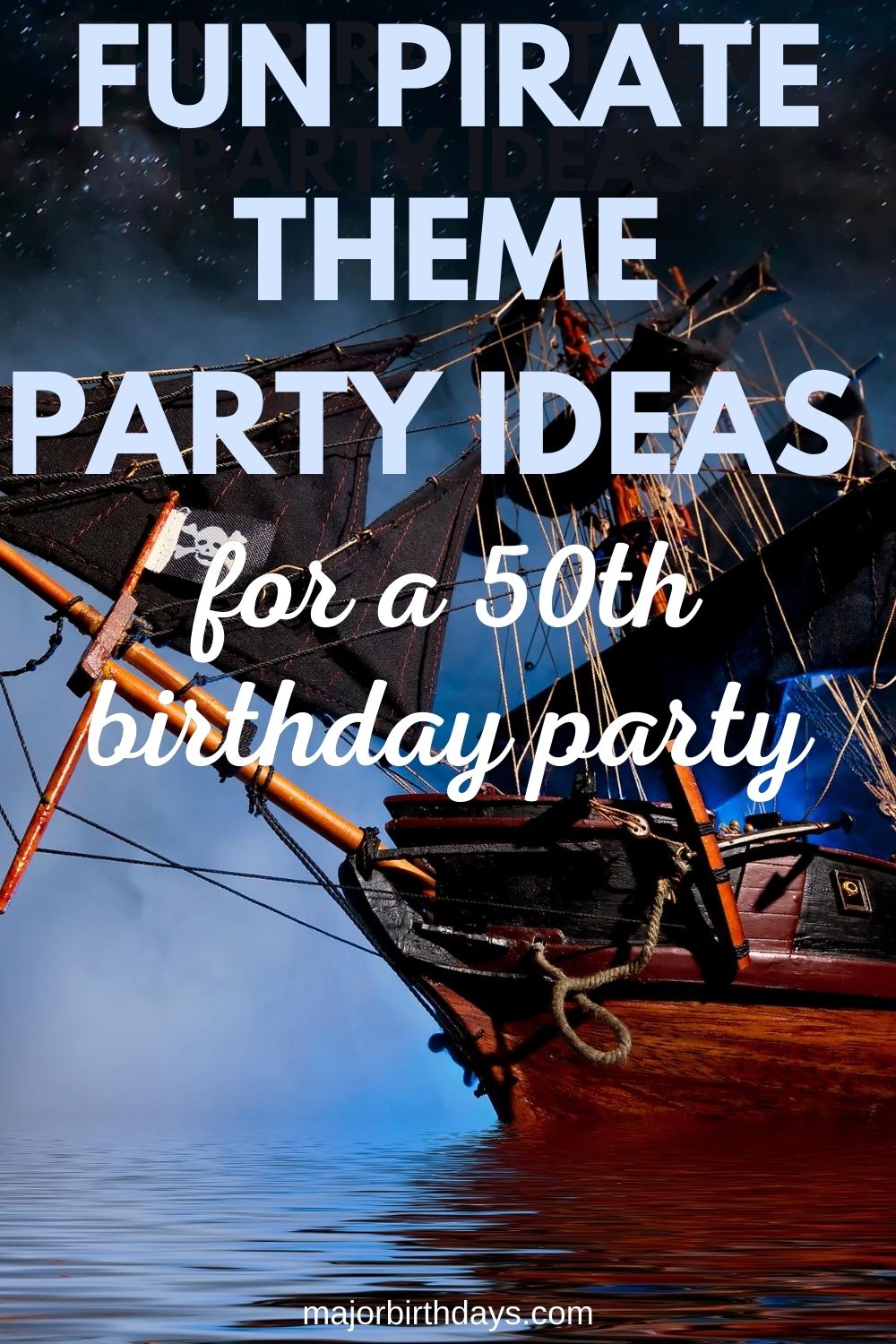 Previous
How to give a boss's 50th birthday party? 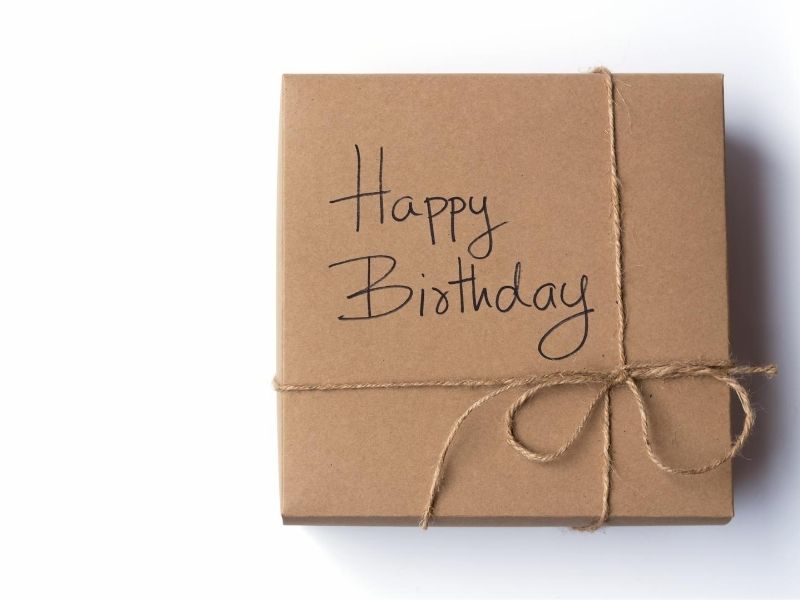 Next
The Best 50th Birthday Gifts for Men

As an Amazon Associate, I earn from qualifying purchases.