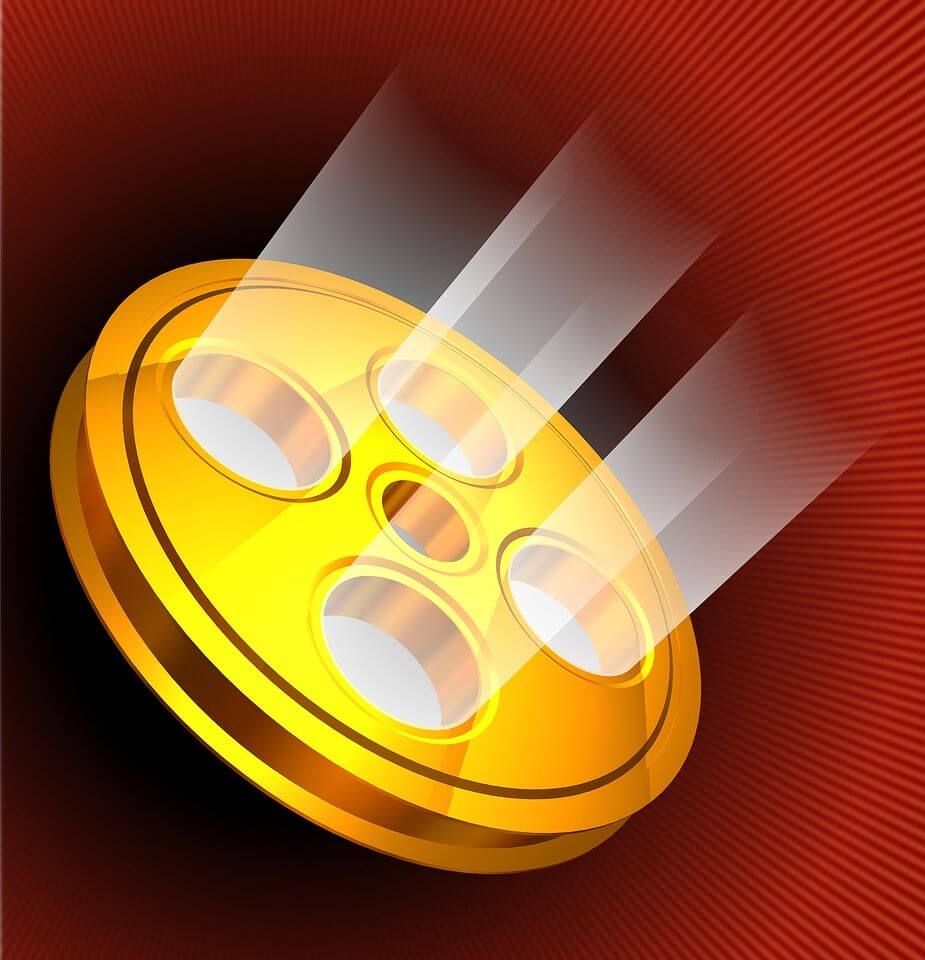 A movie theme party for a 50th birthday is a great idea for the guy or girl who has it all. It’s easy to do, too. Just create the movie playlist, then build the party around that.

Does your birthday person l-o-v-e movies? Are they the kind of person who enjoys going to the theater to see the latest flick? Do they ever rave about a favorite actor or a movie they’ve recently seen?  If you find yourself in charge of their 50th birthday party, this great little theme could work well for you.

If the birthday party is for you, then this theme is a good way to rally your friends and family and have a fun get-together on your birthday.  Don’t do the same old thing you do every holiday! Get into it and put on this easy-to-do movie theme party. You’ll have a blast and your guests will love it.

Give Them a Break – This is the kind of theme you could use for someone who wouldn’t take well to the gags and teasing that ensues at other 50th birthday parties. At a movie theme party, the attention doesn’t go fully on the person.  Instead, it goes on the movies, so it’s a good way to avoid the other, more parody-esque behavior other theme ideas that might invite.

Unisex – This theme works well for both guys and girls. It’s especially good for cold-month birthdays and for those people who own a good theater system and enough seating to accomodate a guest list.  However, any lack of seating could be compensated for with chairs and floor pillows.

With some thoughtful planning and a few special details, this can be a special 50th birthday theme you’ll all remember forever.

Choose a Subject for Your Movie Theme Party 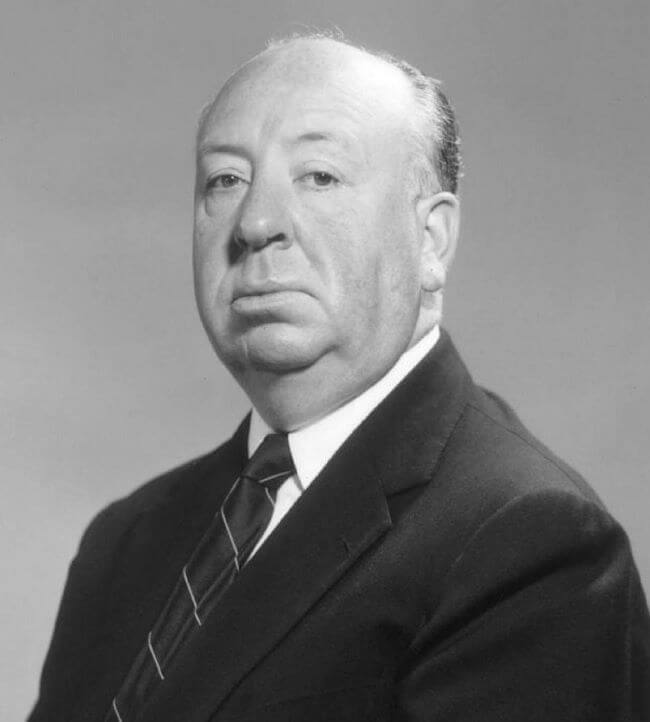 One way to make your movie theme party great is to focus on their favorites.  If your birthday person is a movie buff and you know their likes and dislikes, that could be easy.  If not, you’ll need to brainstorm your playlist.  You can do this by researching actor, actress, director, franchise or genre ideas.

Example: I love Alfred Hitchcock movies and an evening of watching classics like The Birds, Vertigo, Psycho and The Rope would be very enjoyable for someone like me.

In fact, movies by well-known artists like Alfred Hitchcock are available in a collection.  You could gift a collection to the movie lover who “has it all.” 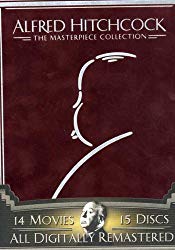 You could choose a new-release movie the birthday person would like to see, or you could create a mini film festival of movies from a specific genre.

On the other hand, why not base the entire evening and decor around one specific classic like Gone with the Wind, Breakfast at Tiffany’s, or Singin’ in the Rain?

Another idea to think of is the new streaming television shows that let you binge-watch episode after epsiode without ever touching the remote.  This could be good for a 50th birthday party that lasts an entire weekend.

The key to successful choosing is identifying what the birthday person likes.

No problem! To get you started, I’ve put together some movie subject lists below, to get your creative juices flowing.  Give them a look!

(Note:  I’m absolutely sure I’ve not listed every possibility here. But that’s okay! I recommend using IMDB.com for more in-depth research.  They have scads of lists and topics to browse through.)

I hope those lists help give you ideas. You can also try Rotten Tomatoes for even more brainstorming and ideas.

Here’s an idea to make the party really fun.  Instead of just watching the movie, have each guest interact with theme by bringing something related to the movie or wearing something that’s associated with it. Even gifts can be movie-related!

You could go all out and make it a cosplay party!  I bet some die hard Star Trek fans would go for that idea.

Some really big movies have soundtracks you can play as background music before and after the movie. Some examples of movies with soundtracks are Barbara Streisand movies, James Bond movies and Shaft.  Finding the music might be a trick, depending, but I bet you’d have luck at iTunes and/or Amazon.

Menu for a Movie Theme party 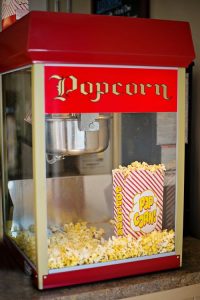 So now that we’ve decided upon the subject, the playlist and the music, it’s time to think about refreshments.

Since this is a movie theme party, the menu is obvious. There HAS to be popcorn involved somehow.  For a small gathering, you could use your own popcorn maker or favorite stove-top method.  For larger gatherings, you could rent a popcorn machine like those you see at the movies.

Serve the popcorn in popcorn cups or tubs and for an ultra-specal touch, set up a popcorn bar!  Let guests serve themselves and help them create their on special popcorn concoction bysetting out an array of toppings like butter and salt, various dried herbs, lemon pepper, garlic powder, olive oil, truffle oil or other flavored oil, soy sauce and parmesan, cinnamon sugar, hot sauce, or wasabi powder.  Perhaps you have a favorite not listed here?  Put it out there!

Along with those crispy kernels of goodness, I recommend the rest of your menu resemble a concession stand at the movies, with one caveat.  Make it much, much better.  Allow me to elaborate.

In some cicles, a hot dog is a wiener nestled in a white bun.  But at this 50th birthday party, you can make hot dog masterpieces.   First, decide whether you’ll steam, roast or grill the dogs.  For the wrapper, you could offer a cheese-baked bun, a pretzel bun  or a poppy seed bun.  For toppings, you could offer an array of possibilities, each ingredient a potential of something very special.  Here’s what I’m talking about. Along with ketchup mustard and relish, you could offer dill pickles,  tomato slices, onions and sport peppers, chili, cheese, cole slaw, sauerkraut, guacamole and salsa (serve with tortilla chips). Your guests will doggedly create the best ever dogs!  (Like how I did that? :D)

Along with the above, serve other movie foods like pizza (frozen, deliver, or homemade), nachos and candy you put out in bowls. I do recommend adding a salad so everyone gets their veggies!

For this movie party theme, I envision a devil’s food sheet cake frosted with white icing, decorated like a filmstrip, then topped with your favorite birthday sayings. Voila!

The decor for a movie theme party is a no-brainer.

Red Carpet – Have your guests arrive in style.  Put down a red runner or purchase a small carpet remnant so they can make a grand entrance.  Place velvet ropes or red ribbons around the entry way for more pizazz.

Posters – Movie posters will be essential.  Try to use posters that match your playlist just like you’d see at the theater.

Signs – For your Happy Birthday banner and other signs, create a “Now Showing” marquee and put the birthday person’s name in lights. 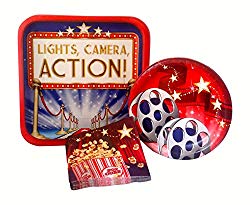 For the popcorn, you could even get custom personalized popcorn cups that guests could use as a keepsake of sorts, especially scrapbookers.  Beaucoup is one merchant that offers personalized items like this.

Etc. – Other touches might include movie table runners, movie set props and if you choose a popular franchise for your playlist, use signature props from that movie/franchise and scatter them about.

Costumes – Those of you who like to go all the way and/or hire staff for your movie theme party?  Use usher costumes to play the part.   You could have someone wear a costume of your movie character and entertain the kids – as long as it’s a kid-friendly character like Batman or Indiana Jones.

This is probably my favorite touch to make a movie theme party fun and exciting. Two strong ideas come to mind, actually.

Clapperboard Invitations – You know that board they click before filming a scene?  Style your invitations accordingly, with one side being the party details

and the other side being the address and directions.

Casting Call Invitations – Make your invitations in the form of a casting call announcement.  This is asy to create yourself and with the right graphics, you could use regular paper and envelopes.

Either of these ideas would add a whimsical detail to your movie theme party and set the stage for fun, fun, fun!

Gifts for a Movie Theme Party

Big Gifts – Want to give a bigger gift?  Present them with a new home theater, or a new theater-style sofa.  How about a new video camera?  Or splurge with a trip to Hollywood with a stroll down the Hollywood Walk of Fame, tickets to the Oscar ceremonies and/or a movie studio tour?

I hope you like my brainstorms and ideas for a 50th birthday movie theme party.  It could be a really fun time for someone you love … or even you, if you’re planning your own party.  The key is to choose favorites in films, food and music.  The rest is easy!

As an Amazon Associate, I earn from qualifying purchases.